Here is a video of Isabella last year on Halloween. She was 28 months old. The best part of that night (and the funniest) was when she was dancing with the skeletons. Everybody was watching her because all the other kids were too chicken to go up and dance, but not the boo! I had a such a hard time keeping up that night because I was 5 days from giving birth to Simon and my stomach was SO big but I managed and I had fun too!

A few weeks ago I went to the mall with my mom and the kids. My mom bought the kids their winter boots (thanks mom!) and once again I couldn't believe the size of boots we had to buy.

Room for more than one - part 2

OMG! I asked Simon for a kiss tonight and he leaned in and gave me the biggest, wettest open-mouthed kiss. And I asked him another five times and he kept giving out those kisses!!! He has never done that before and it was so darn sweet I just about died. One less thing he might do for the first time while I'm back at work...

Isabella had been watching a movie - Barbie and the Diamond Castle - but had gone upstairs to see her dad, leaving Simon and I in the basement. I was on the computer and looked over to notice Simon completely fixated on the movie. Turns out he loved the songs in the movie and couldn't get enough.

I took a few pics of him sitting next to the couch where he sat for a good 20 minutes just watching the movie. 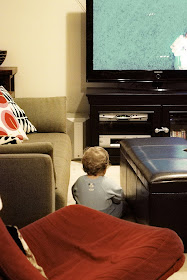 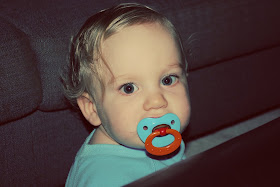 Then he decided to get up close to check out the princesses. 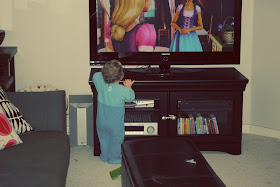 I'm going to have to go buy some non-girly movies to broaden his horizons (although I'm fully aware that he shouldn't be watching tv at his young age...)
4 comments:
Share

Simon didn't have a clock in his room which drove me crazy. Being addicted to etsy, I thought I'd try to find something there which I did of course. I got it the other day and it is so vintagey cute and woodsy appropriate for Simon's room: 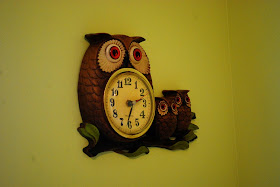 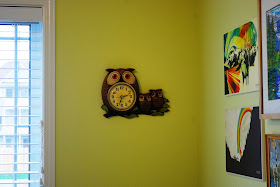 I just heard Isabella say to herself, "I can't fool anybody because everybody's fooled."

A friend of mine from work was having her baby baptized this afternoon and I went with Isabella. This was her first time in a church and she was so darn good and quiet! About 10 minutes into the service she whispered to me that she had to go to the bathroom. I whisked her into the bathroom and as she was 'completing the task' she said, "We have to hurry or we're going to miss the show!"

Dinner was almost ready and Isabella was bugging me for a snack. I kept saying no and after a few minutes of whining she said, "I REALLY need some food so I can grow up and bake a cake."

I was coming out of the bathroom and Isabella and I almost collided in the hallway. She looked up at me and said, "Oh sorry boss!"

Now that's what I'm talking about!!!
No comments:
Share

It's kinda nuts around here...

Simon is sick. And it really sucks. Monday night he woke up in the middle of the night with a fever. And kept waking up every half hour for the rest of the night. On Tuesday morning, Pablo and I were supposed to drop off the kids with my folks so that we could go to Montreal shopping for clothes for me. Simon looked to be much better Tuesday morning after some medication so we did as planned and dropped off the kids and left for Montreal. Simon's fever came back during the day and all he wanted was to be held by my mom. My mom told me how Isabella was amazingly well behaved all day considering she couldn't give her the attention she usually gets. We got back into town and picked up the kids at 7:30pm. Simon looked so sick - it was heartbreaking. We gave him some Tempra at 8pm and he fell asleep. He woke up at 2:30am and was awake for about an hour and then fell back asleep till 7:30am. Pretty good night overall.

Today Simon's fever is pretty much gone but he is grumpy. And Simon is never grumpy. He's had some baby cereal, a bit of soup and lots of water (and only one puke session). During one of the trips to the kitchen to feed him some cereal, Isabella was in the basement watching tv. (Recently, Isabella has discovered the magic that is commercials. And not just any old commercials but commercials selling toys. Every commercial she'll ask us to look at the tv and promise to buy her whatever toy is being advertised.)

SO, while I'm in the kitchen feeding Simon, praying that he doesn't projectile vomit cereal all over me and the semi-clean floor, Isabella HOLLERS from the basement, "MOMMY! CAN YOU BUY ME THIS TONKA TRUCK?!?!?!?!"
No comments:
Share

I can't remember how I found this site but I just fell in love...fantastic interior photography!